The manifestation of prophecy is primarily to build up man in his walk and help establish his relationship with God.
Prophecy will not contradict the written Word because God is not the author of confusion, and He will never confuse by saying one thing in His Word and another in prophecy.
Therefore, when prophets speak, their words enjoy the blessings of God.
Apostle (Prof.) Johnson Suleman, a revered Prophet of God, on the New Year eve, released a number of prophecies among which some have come to fulfillment.
The latest being the reported resignation of President Jacob Zuma of South Africa. In his precise divine message listed on number 27 of the 2018 prophecies, Apostle Suleman who is the President of Omega Fire Ministries, said: “South African President Jacob Zuma To Be Humiliated.”
The first two fulfilled prophecies for the New Year include the electoral victory of former footballer, George Weah, as Liberian president, and the government clampdown on bloggers and social media influencers, with a popular online publisher, Elombah, picked up and detained by the Nigerian government. 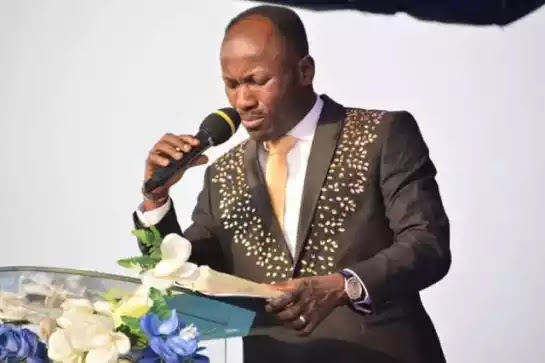 Checkout This Rare Photo Of Femi Otedola With His Apple Smartphone